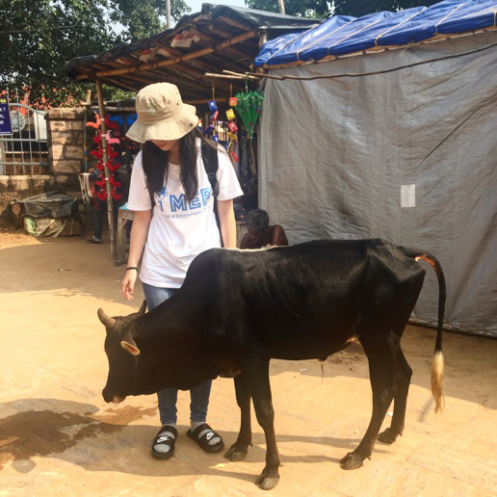 “Have you heard about the story of Hunter Helix?”

“Hunter Helix was once rewarded a magical gem by Dragon King for his bravery, which could help him understand all the languages of animals around the world.”

The gem described in the famous fairy tale has aroused tons of readers’ yearn, so has Elle when she was even in primary school. She was so keen on the animal world that she spent much of her time observing different animals and talking to them. Elle even wrote in her diary that she wanted to become a zoologist and to devise an animal language translator.

However, she chose to major in Finance following the will of her parents in college. To her parents, studying and protecting animals is a path that is not that reliable and stable compared to other jobs.

But Elle did not give up her dream of connecting her life with zoology. Conducting surveys, researching for supervisors, and changing her major, Elle strived for any opportunity.

Now, this 24-year -old girl has already been an official member of an international wildlife conservation organization.

A trip to Africa– Path to Animal Protection

It was difficult for Elle to get access to what she favorited in a school of business. No one could offer her proper resources on issues about zoology. Therefore, Elle took elective courses on biology and finished scientific researches constructed by the only two biology professors at school. Comparing to schoolmates around looking for an internship in banks and securities companies, Elle spent much of her time in her interested area, such as analyzing river samples and doing experiments in biology labs. For her, these things are much more interesting than financial analysis. Until she graduated, Elle never even entered the school’s Bloomberg Finance Lab.

Besides, she kept looking for opportunities to take part in professional researches. Instead of some short-term international volunteering programs like traveling, Elle chose the Southern White Rhino Research Project in Kenya organized by China House. She left for Africa in February 2018 to investigate the business operation model of wildlife reserves — a topic that combined her business major with animal protection.

First time arriving in African savannah, Elle showed great interest and excitement to all wildlife, full of curiosity on zebras, orangutans and elephants living around.When she saw a zebra, she wanted to chase it; when she saw an orangutan running, she ran with it; when she heard the sound of elephants in camp at night, she sneaked out to find the elephants.

However, the meaning of the trip was far beyond just viewing animals. One of the most important things was that Elle acquired a new understanding of wildlife conservation: it is a professional field full of complexity.

She realized that wildlife conservation wasn’t just about animals, but was also about people and community work. Besides, she found that wildlife conservation had a close relationship with business and marketing–which she had previously neglected to study: 70% of the revenue at Opejeta reserve came from tourism, and the reserve manager had a constant concern on how to attract more Chinese visitors.

The mentor also offered her inspiring suggestions: “If you want to work for an animal welfare organization, look at their job postings and requirements, and see how you can join them; If you want to know how to get there in the future, analyze the paths to success of industry benchmark.”

Besides learning about animal protection, Elle, who used to interact more with animals and less with people and rarely with strangers, also developed the skills of initiating conversation and interviewing strangers during the trip.

This trip to Africa had played a vital role in helping her defining directions of future development. When Elle stepped on the airplane to return home, she had already known that this unique trip would instruct her how to research by herself in the future.

After returning from Kenya, Elle had a better understanding of the threats to wildlife. She realized that there still exists a lot of trade in wildlife products, and many are closely related to China. Through her conversations with her mentor, she learned about Mongla — a district on Myanmar’s border with Yunnan province, China, where illegal wildlife trade is rampant.

After doing desk research, Elle decided to go to Mongla with a border tour group.

After returning from Kenya, Elle had a better understanding of the threats to wildlife. She realized that there still exists a lot of trade in wildlife products, and many are closely related to China. Through her conversations with her mentor, she learned about Mongla — a district on Myanmar’s border with Yunnan province, China, where illegal wildlife trade is rampant.

After doing desk research, Elle decided to go to Mongla with a border tour group.

“Tiger teeth, wolf teeth, leopard teeth, bear teeth, and ivory, you can not find these treasures in China. Coming to Myanmar, of course, you have to buy these souvenirs and bring back home.” On the tour bus, the guide’s words spread to everyone’s ear.

Despite learning some information in advance, Elle was deeply shocked by the “free market” in Mongla: pangolins, tiger bones, bear paws, ivory… Wildlife here is being brutally harmed and trafficked.

Keeping calm, she finished the trip and gained an intuitive idea of the wildlife product trade. “After all, I am a tourist in the eyes of others, and untimely actions will hinder me get information.”

Later, in the summer of 2018,  an international wildlife conservation organization contacted China House in the hope of recommending appropriate investigators to help them investigate Chinese tourists buying ivory in Laos. Elle, who had accumulated investigation experience in Mongla, was the chosen one. Although risky, Elle took the opportunity without hesitation. After receiving a brief training, she went to Laos for two-week research.

In Vientiane and Luang Prabang of Laos, Elle disguised herself as a tour guide and visited many local souvenir shops serving Chinese tourists by chatting with shop owners. She researched the truth of Chinese tour groups purchasing and bringing ivory souvenirs back home, wrote several reports, and sent them back to China.

During one of the investigations, Elle found out that the shopkeeper came from the same city as her. She started chatting in her native language, and the shopkeeper was happy to meet her and said a lot of inside information.

When Elle recalled the risk of hiding her identity, she acknowledged the fear and realization that the wildlife product trade happens around us. As she learned a great amount of first-hand information that many international wildlife organizations care about but don’t get access to, she received lots of working opportunities out of expectation, including the job she’s doing right now.

Elle studied for a master’s degree in environmental policy after her undergraduate studies and did conservation researches with her tutor. Her master’s project was about “Effects of Animal Dung on the Behavioral Ecology of Pandas.”

Some past experiences also brought future opportunities to Elle during the postgraduate period. She even had a chance to share her findings on wildlife trade in ICCB and ATCB, two of the most influential academic conferences in the field of international conservation biology. She also visited the Lemur Center at Duke University in the U.S. and conducted a three-month study of lemur behavior. With the recommendation from a professor at Duke University, Elle also traveled to the Costa Rican rainforest in 2019 to study the behavior of leafcutter ants, guinea pigs, and other animals.

Graduated in 2020, Elle was pretty close to her dream of becoming a zoologist since her childhood. Instead of keeping on conducting field works, however, she chose to work for an international wildlife conservation agency.

Elle had accumulated some experience in animal behavior research and wildlife protection then, but she was not sure about which direction she is most interested in. She decided to work for a few years to learn more about the wildlife conservation industry.

It just so happened that in the year Elle graduated, a Wildlife Conservation International, which had contacted her about the ivory trade in Laos, was looking for a full-time job and asked if Elle would be interested. After multiple interviews, she finally got the offer.

In this agency, her job is to help eliminate the wildlife trade and promote international cooperation in this area. Every day, she takes the subway to the office to check materials, does analysis, and writes reports — a long-term job, which is indeed unlikely to be fresh and exciting all the time, but it can bring some practical impact to the world and herself.

“Is this what you ultimately want to do?”